December Recap – What I Read This Month

By marissabellantoni12 in Uncategorized on December 30, 2019
No comments

Wow, I cannot believe that it’s already the end of December. Every year I spend so much time focusing on getting ready for the holidays and then they come and go so quickly. Now that the festivities are over, and the month (and the year!) is wrapping up, I wanted to discuss what I read this month. Here’s my December Reading Recap:

(Also just a disclaimer that any link to the books discussed below is an affiliate link!)

99 Percent Mine by Sally Thorne

99 Percent Mine tells the story of Darcy Barrett, who is reconnected with her childhood friend Tom Valeska when her twin brother hires him for the renovation of their grandmother’s home. Old feelings are stirred up and sparks fly as the two work together and live in close quarters for the first time in years. Darcy has spent her whole life only holding 1 percent of Tom’s heart (knowing her brother has the other 99 percent) and she’s finally ready to learn what it’s like to have Tom Valeska be 99 percent hers.

I’ve been hearing amazing things about The Hating Game by Sally Thorne since it came out! I’d always meant to pick it up, but it kept slipping my mind. So finally when I got a new job right across the street from a Barnes & Noble, I went in on my lunch break to get my hands on this book, once and for all. Unfortunately, they were out of The Hating Game, but I was still intrigued by 99 Percent Mine.  I’d heard so many rave reviews about Sally Thorne as an author and was excited to start anything she’d written. Shortly after, I fell into a pretty awful reading slump, so I didn’t have a chance to really get to it until now.

I’m not going to lie I had such high hopes for this book since the author was recommended by someone’s who opinion I value greatly. However, it fell a little flat for me. My main issue was that I had a difficult time rooting for the main couple, Tom and Darcy. They went back and forth in what, to me, felt like a very confusing manner. It was hard to follow and at times, difficult to feel the sparks between the two. This may have a little to do with the fact that I found the pacing extremely slow. I felt like I was more than halfway through the book before the plot really started to pick up and peak my interest. However, once the story did pick up, I found it very interesting and a page turner. Once things become a bit clearer in the later chapters, I couldn’t put this book down. Additionally, while I didn’t connect with the main character Darcy, I absolutely loved Tom.  He was so complex and had way more depth than I anticipated for a romantic comedy.

Overall, the book was a quick and easy read with many humorous elements to the dialogue and storyline. I just wish the story/romance plot picked up a little bit earlier in the book!

Tell Me Lies by Carola Lovering

Through flashbacks told from both perspectives, Tell Me Lies tells the story of college students Lucy Albright and Stephen DeMarco’s complicated relationship. Stephen isn’t good for her, and Lucy knows it. Lucy can’t seem to let go, and Stephen knows it. The two wade through the challenges of young adulthood while falling into an endless cycle of break ups and make ups and clinging to the secrets from adolescence that have shaped them. Years later, the two find themselves face to face again and decide the fate of their relationship, once and for all.

There are no words for how much I loved this book. No one recommended this one to me,
I discovered it on my own on the same lunch-break Barnes & Noble trip with its bright, colorful cover. I am so glad that I decided to try this book because it was such a captivating story. There were so many nights that I stayed up late and dragged myself to work with heavy bags under my eyes because I just couldn’t put it down. I had it finished in 3 days flat.

To start on what will probably turn into a gush-fest about this book, it was extremely well written. Because the story was told through both the POV of Stephen and Lucy, some scenes were seen twice from each of their perspectives but it never felt stale. I’m not a huge fan of switching POV’s. I usually find it distracting, but for this book, it added a little something extra to the storytelling. Each part of Stephen and Lucy’s relationship was experienced uniquely and it was interesting as the reader to see how the same moment could be interpreted so differently by each of them.

On top of that, their relationship dynamic is something that I rarely see explored in this genre. Most romance based novels, young adult or new adult, typically focus on a relatively healthy relationship that faces difficulty and ultimately has a satisfying happy ending. It was refreshing to see Carola Lovering choose to explore a toxic relationship because there are so many girls that have struggled or are struggling with this type of dynamic. Though books are often consumed for entertainment or an escape from our own lives, sometimes it’s just as helpful to see a dysfunctional relationship similar to yours play out in a novel.

I may just be speaking from personal experience, but seeing a relationship dynamic I was so familiar with helped me feel extremely connected to this story and to Lucy as a character. Stephen and Lucy’s story made me reflect on my own life. There’s nothing that gets me more than a book that makes me think and this story had me contemplating my own relationships, how they could possibly look the lens of this kind of storytelling. I don’t know quite how to describe it, but something about seeing a situation similar to one I went through, instead of the fantasy romance that usually plays out in novels, made me feel less alone.

Additionally, the final element of this book that I loved was there were some pretty Big Questions introduced that have thoughtful hints to the answers dropped throughout the story. This gave me the opportunity as the reader to speculate and attempt to figure out what the Big Answer was going to be. And by the end of the book, these questions are not only answered, but are done so in a way that leaves the reader satisfied. Again, I love a book that makes me think so I really loved that Carola Lovering didn’t outright state what each character’s secret was at first and that it gave me a chance to create my own hypothesis for what it was. (I was spot on for one, by the way!)

The only negative I have for this book is that it was her first novel, so I don’t have any more of hers to read. I am definitely looking forward to her next release.

Overall, I could not recommend this book enough – I give it a 5 out of 5 rating!

We Met in December by Rosie Curtis

Don’t judge me – I didn’t get a chance to finish We Met in December! The holidays came and I was completely unprepared. I barely had time to sleep and eat, let alone read. I was able to sneak in a few good reading sessions here and there, but will have to shelf this one for my January Recap. What I know so far is that it’s an easy read and definitely something fun for the holidays. I look forward to snuggling down in the New Year and giving this book a good read.

And that’s my December Recap – it’s a little stingy this month, but give me a break, it was the holidays! Hopefully, next month I’ll be able to relax a little more and get dive into my January TBR.

Happy New Year everyone and see you in 2020! 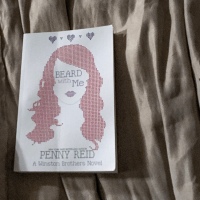 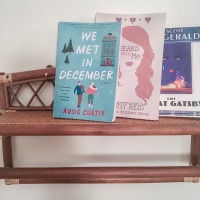